Before We Were Yours by Lisa Wingate gave me an intense need to hug my children. Parents with little ones: Do not, I repeat, do not, choose this book to read on a vacation away from your kids. I wasn’t on vacation while I read this, and I was thankful for that. Trust me when I say, you’ll want them close while you’re reading it.

That being said, I really liked this novel. It is a fictional account of real events involving Georgia Tann, Director of the Tennessee Children’s Home Society, arranging for the abduction of poor children who were then sold to wealthy families. Wingate tells the story of siblings separated by this injustice, and flashes forward to one of their descendants, an attorney attempting to solve a mystery when she has an unusual encounter with an elderly woman at a nursing home.

Though this is a fictional account, these arrangements truly took place. They went on from the 1920s all the way until as late as 1950. Georgia Tann died before she could be arrested or tried for the pain and suffering she caused.

Wingate’s character development was really effective to me, despite the bouncing between decades. That approach to the story was done in an organized way, which made the story flow well. Heart-wrenching in many ways, the book does offer hope, and is a beautiful depiction of the bond between siblings. 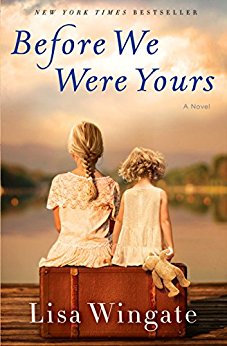